A Houseplant Icon: History of Monstera

A Houseplant Icon: History of Monstera

Monstera plants are a beautiful ornamental prized for their size and characteristic holey leaves. They’re also relatively easy to care for!

Part of the fun of having indoor plants is learning where they come from and how they grow in the wild. Plus, understanding their origins and natural habitat can help us mimic that habitat in our home so our plants can flourish!

Let’s take a closer look at the history of monstera, where they come from, and how they grow in the wild so we can better understand (and care for) these gorgeous plants!

But first, a little background:

Monsteras belong to the arum/araceae family, which also includes peace lilies and calla lilies. They’re also a relative to pothos and philodendron and are often, though mistakenly, called split-leaf philodendron.

There are 22 different species of monstera out there with several different varieties within those species, such as variegated varieties. (Read more about the different monstera varieties here!)

Monstera deliciosa is the most common variety that you’ll find in homes and in local nurseries and is by far the most popular ornamental.

Is also produces the Mexican breadfruit, which earned this plant the nickname “fruit salad plant” because the fruit is said to taste like a fruit salad! This fruit smells like a cross between a banana and a pineapple when it’s ripe and looks like a scaly piece of corn on the cob. When those scales fall off, you know it’s ripe!

We also think this plant has the best name ever! The name monstera means “monster” or “monstrous” and refers to the size of these plants. Deliciosa refers to the fruit it produces, and that adds up to monstera deliciosa, or delicious monster, one of our favorite plant names ever!

History of Monstera in the Wild

Monsteras originate from tropical regions in Central America, ranging from the southernmost part of Mexico to Panama. Monstera is also found in other areas where it was introduced, like Hawaii.

These plants thrive in dense rainforests where they use their aerial roots to “climb” up trees towards the light in the canopy. Young leaves will grow toward the darkest part of a tree base, which helps them find and attach to a sturdy trunk.

No one knows exactly what monstera’s iconic holes are for, though it’s theorized that the holes develop so the leaves can withstand high winds without tearing, or to allow a little more light to pass through the upper leaves to the lower leaves.

Monstera plants can grow up to 20 meters tall in the wild and the leaves can grow up to a meter long! Indoors, however, most monsteras top out at about ten feet, which is still considerable for a houseplant.

Before monstera leaves mature, their heart-shaped leaves have no holes and look similar to those of pothos or philodendron (this might also be where some of the split-leaf philodendron confusion comes from) That’s also one reason why it’s hard to tell some monstera varieties apart when they’re young because they haven’t developed those characteristic holes yet. Many varieties get even more holes with age, so it’s easier to tell the age of the plant.

When monstera deliciosa is about 3 years old, it flowers and produces fruit, which is one of the reasons why this plant was first cultivated.

Monsteras in your home 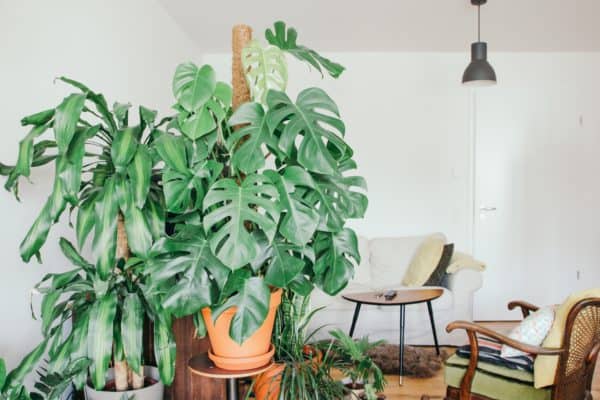 Monstera deliciosa, in particular, has a long history in its homeland as a source of food, medicine, and fibers. The roots have been used to weave baskets and ropes, and it’s also used to treat arthritis and other ailments in some areas.

Today, you can find monstera plants thriving indoors and outdoors in Mediterranean regions and also throughout Asia. In fact, in China, monsteras are a symbol of longevity!

Monsteras are also relatively easy to care for and pretty hard to kill. Their ability to thrive in the shade makes them well-suited to living indoors, and the constraints of a pot prevent them from growing too large, though they can still easily reach your ceiling.

They make quite a statement!

Read our article on caring for your very own monstera here!

To chat with other monstera plant owners, join our community on Facebook. 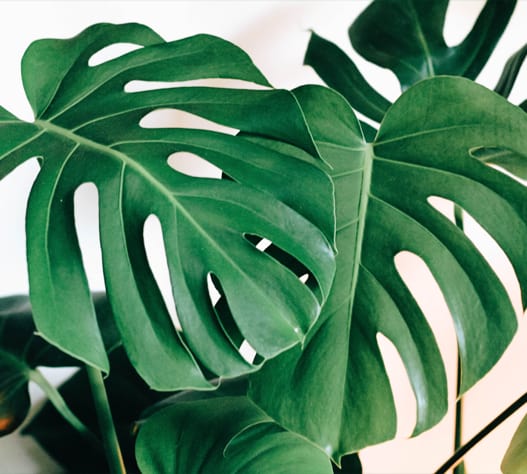 About the Author: Claire Akin

I love monsteras and writing, so I created this site to combine my two passions. I hope you find the information helpful. Happy growing!

ON ALL OF OUR PRODUCTS NOW!